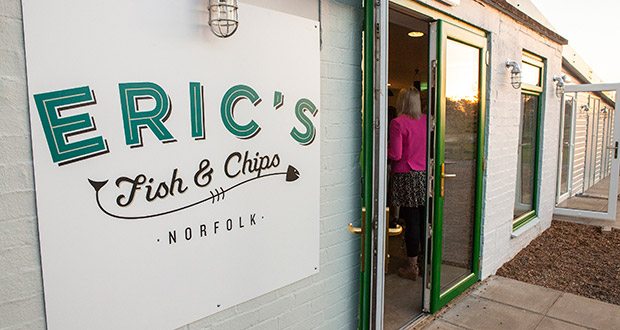 Cancel the kebab, and don’t bother with burgers, because there’s a new trend in town – and it’s a British fish and chip shop classic; the fritter.
The humble fritter, so often demoted to the tail end of the chippy menu, has been given a new lease of life and is making a culinary comeback at Norfolk fish and chip restaurant Eric’s Fish & Chips.
From the simple Smoked Potato Fritter, to delicious Curried Lamb and tasty Thai Spiced Crab options, Eric’s are hoping to free the fritter from its dated image and give it the foodie fame it deserves.
Sitting pretty along the picturesque Norfolk coast, Eric’s Fish & Chips was opened by Eric Snaith, head chef of nearby Titchwell Manor, in April this year. Serving traditional fish and chip favourites along with more modern, European plates, such as halloumi and spinach arancini and grilled mackerel with lemon, herbs and garlic, the restaurant has already established itself as a local favourite and dining destination.
With a menu featuring both savoury and sweet options, fritters are available NOW costing from £2.
Fill your lungs with the fresh, salty sea air and celebrate the reinvention of a fried food favourite at Eric’s Fish & Chips.
For more information visit www.ericsfishandchips.com
Fish and Chips 2015-08-19
ByTheSea

Tagged with: Fish and Chips