Enjoy North Norfolk More
Home | News | The Fairy Fair: A Magical Day Out In May 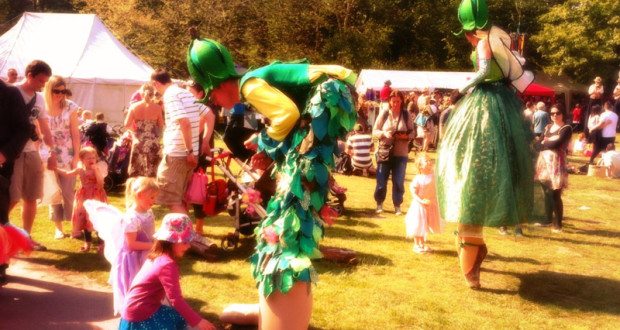 The Fairy Fair: A Magical Day Out In May

Last Monday was Little Man’s 5th birthday. What better way to spend it than outdoors in the sunshine, in the woods, at the annual Fairyland Trust‘s Fairy Fair?

Held at Holt Hall – a beautiful, enclosed setting full of flowers and trees, this was our first Fairy Fair as a family. Having been to several of their ‘Real Halloween‘ events in the past though, we knew what to expect and certainly weren’t disappointed.

Something of an annual mecca for families, the Fairy Fair has become the hottest ticket in town in recent years. It always sells out, and at less than £8 a ticket (free for Under 3s), it’s also one of the best value days out you’ll find in Norfolk.

From the minute you arrive, you’re transported into another world. One straight from the dreams of Enid Blyton, with a helping of imagination courtesy of JM Barrie and perhaps Lewis Carrol. Little girls dressed as fairies and princesses head excitedly from the car park towards the Hall, whilst little boys, equally thrilled, come as pirates, knights and elves. Once inside, you’ll see sights that you’d only find at a Fairy Fair – giant gnomes, trolls and, this year, 7 foot tall fairies and elves strolling about as if this was commonplace. The setting is perfect for families, bring basically enclosed (unless you were determined to run off and escape through the woodland), free of dogs, and safe (there is a large pond on site, but it is well marked) – perfect for wholesome childhood memories to be made. 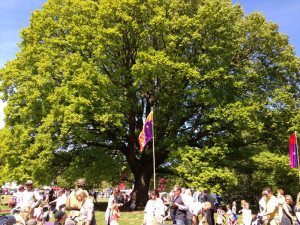 Little Man was booked onto one of the famous Fairy Fair workshops – a new one for this year – Elf Training Camp Level 1. For around 45 minutes he learned about moving through the woods like an Elf, while sporting camouflage face-paint and leaves to disguise his Knight’s costume. Such hiding, troll-avoiding and scurrying was interspersed with learning about trees and how to identify them by the shape of their leaves and the texture of their bark. 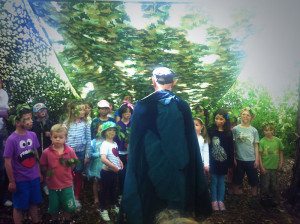 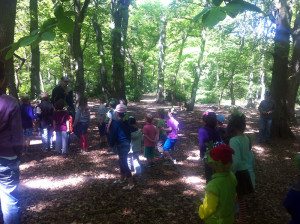 That is another marvellous thing about the Fairy Fair – The Fairyland Trust purposefully designs and creates multi-sensory experiences for children which use ‘magic’ and the imagination to engage them with wildlife, ecology and landscape through having fun. Little Man made an ‘Elf-scope’, to assist in such investigations of nature and at the end, took home a certificate to say he’d passed Elf Training Level 1. The workshop was expertly run from start to finish and a brilliant activity to engage young minds of both sexes in the natural world. 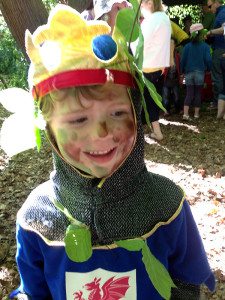 After Elf Training, we had a stroll around, which included taking in a story in the Storytelling Tent, and then found a nice spot to enjoy our picnic lunch.

The afternoon involved a walk through the grounds of Holt Hall (just lovely), cup-cake decorating and a trip to the ‘Pirate Fete’, which included a fun-but-violent game called ‘Bash The Buoy’ (which, naturally, Little Man loved) and soaking Daddy in the stocks (‘Death By Mermaid’). There was also ice-cream and music. Perfect.

After all this, we went deeper into the woods to indulge in a spot of den-building. There was also the option to make a Fair Garden, and judging by plethora of mini displays (think Chelsea Flower Show on a more natural scale, with added glitter), this had been popular. 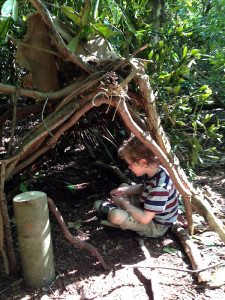 Heading homeward at almost 5pm (the day ran from 10am-5pm), with two tired little boys (Littlest Man – 15 months- had also enjoyed toddling around the space – dressed as a pumpkin obviously), I can’t think of a better way to have spent a birthday, a Bank Holiday Monday and the first day of Half Term. Sure you can assault your sense at theme parks with rides galore and still have lots of fun, but this ‘slow fun’ is all you need really – den building in the woods, imaginative role-play as pirates, fairies and princesses, watching puppet shows and listening to actual people telling stories rather than through the medium of an iPad App. Modern life is everywhere and it is wonderful, but the Fairy Fair offers a rare insight into childhood without the electronic whistles and bells. The only problem is that, with it’s growing popularity, The Fairyland Trust may have to schedule a 3-day event next year. Then even more of us can experience the delights of a day in the woods, in the Spring, with added magic. 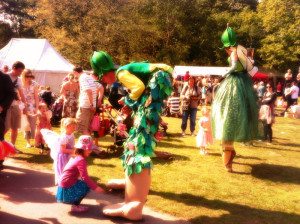